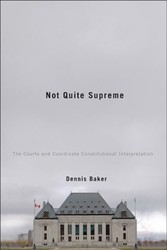 Not Quite Supreme - The Courts and Coordinate Constitutional Interpretation

Not Quite Supreme - The Courts and Coordinate Constitutional Interpretation

Baker argues that coordinate interpretation - a model which requires both elected and appointed officials to interpret the Charter - allows for the creation of a more robust democracy, alleviating some of the tension between constitutionalism and democracy while limiting judicial activism. Drawing on literature from Montesquieu to recent court decisions, Not Quite Supreme gives an extensive critique of both Canadian and American judicial models and explores the tensions between the separation of powers in both countries. Not Quite Supreme is a fresh and substantial contribution to the debate, advancing a new argument in support of a more diverse tradition of legal decision making in Canada that makes the constitution, rather than individual decisions of the Court, its cornerstone.