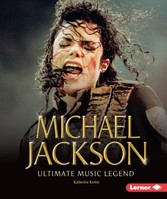 Michael Jackson's journey to fame began in 1966 at age eight, when he started singing with his brothers in the Jackson 5. In the early 1970s, he launched a solo career, accumulating a dozen number-one singles. His record-breaking album, Thriller, has sold an estimated 110 million copies worldwide. He won seventeen Grammy awards and was introduced into the Rock and Roll Hall of Fame twice. In 2009, people of all ages mourned Michael's sudden death. Adored for his music, dancing, and performing-and known for his highly publicized personal life-Michael Jackson remains the ultimate music legend.