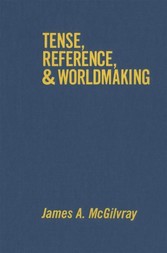 Using Reichenbach's (1947) theory of tenses and temporal structures as a point of departure, McGilvray modifies it to produce a theory of his own. Analysing the difficulties Reichenbach's theory has in explaining the relationship of a speaker to a world, he introduces a new model for this relationship based on the three-interval temporal topology that Reichenbachian theory assigns to the sentences of natural languages.