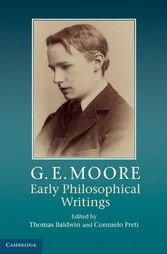 G. E. Moore's fame as a philosopher rests on his ethics of love and beauty, which inspired Bloomsbury, and on his 'common sense' certainties which challenge abstract philosophical theory. Behind this lies his critical engagement with Kant's idealist philosophy, which is published here for the first time. These early writings, Moore's fellowship dissertations of 1897 and 1898, show how he initiated his influential break with idealism. In 1897 his main target was Kant's ethics, but by 1898 it was the whole Kantian project of transcendental philosophy that he rejected, and the theory which he developed to replace it gave rise to the new project of philosophy as logical analysis. This edition includes comments by Moore's examiners Henry Sidgwick, Edward Caird and Bernard Bosanquet, and in a substantial introduction the editors explore the crucial importance of the dissertations to the history of twentieth-century philosophical thought.