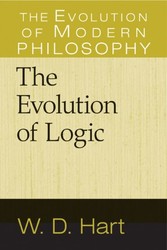 Examines the relations between logic and philosophy over the last 150 years. Logic underwent a major renaissance beginning in the nineteenth century. Cantor almost tamed the infinite, and Frege aimed to undercut Kant by reducing mathematics to logic. These achievements were threatened by the paradoxes, like Russell's. This ferment generated excellent philosophy (and mathematics) by excellent philosophers (and mathematicians) up to World War II. This book provides a selective, critical history of the collaboration between logic and philosophy during this period. After World War II, mathematical logic became a recognized subdiscipline in mathematics departments, and consequently but unfortunately philosophers have lost touch with its monuments. This book aims to make four of them (consistency and independence of the continuum hypothesis, Post's problem, and Morley's theorem) more accessible to philosophers, making available the tools necessary for modern scholars of philosophy to renew a productive dialogue between logic and philosophy.