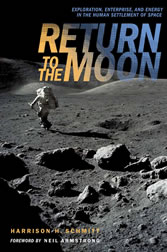 Return to the Moon - Exploration, Enterprise, and Energy in the Human Settlement of Space

Return to the Moon - Exploration, Enterprise, and Energy in the Human Settlement of Space

Former NASA Astronaut Harrison Schmitt advocates a private, investor-based approach to returning humans to the Moon-to extract Helium 3 for energy production, to use the Moon as a platform for science and manufacturing, and to establish permanent human colonies there in a kind of stepping stone community on the way to deeper space. With governments playing a supporting role-just as they have in the development of modern commercial aeronautics and agricultural production-Schmitt believes that a fundamentally private enterprise is the only type of organization capable of sustaining such an effort and, eventually, even making it pay off.


Harrison Schmitt is, as of this date, the 12th and last human to have stepped on the Moon. As an astronaut, pilot, geologist, academic, businessman, and United States Senator, he has had a distinguished career in science and technology practice and policy. Schmitt was the first scientist to go into space specifically to explore the Moon as the Lunar Module Pilot and field geologist on the last Lunar Mission, Apollo 17. He is active in private and government sponsored research into a return to the Moon, and in fusion technologies at the University of Wisconsin-Madison, where he is Adjunct Professor of Engineering. In his role as a Senator (R-NM, 1977-1983) he was chairman of the Commerce Committee's Subcommittee on Science, Technology, and Space.