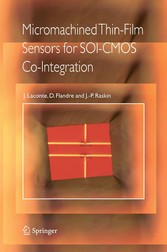 Co-integration of sensors with their associated electronics on a single silicon chip may provide many significant benefits regarding performance, reliability, miniaturization and process simplicity without significantly increasing the total cost.
Micromachined Thin-Film Sensors for SOI-CMOS Co-integration covers the challenges and interests and demonstrates the successful co-integration of gas-flow sensors on dielectric membrane, with their associated electronics, in CMOS-SOI technology.
We firstly investigate the extraction of residual stress in thin layers and in their stacking and the release, in post-processing, of a 1 µm-thick robust and flat dielectric multilayered membrane using Tetramethyl Ammonium Hydroxide (TMAH) silicon micromachining solution. The optimization of its selectivity towards aluminum is largely demonstrated.
The second part focuses on sensors design and characteristics. A novel loop-shape polysilicon microheater is designed and built in a CMOS-SOI standard process. High thermal uniformity, low power consumption and high working temperature are confirmed by extensive measurements. The additional gas flow sensing layers are judiciously chosen and implemented. Measurements in the presence of a nitrogen flow and gas reveal fair sensitivity on a large flow velocity range as well as good response to many gases. Finally, MOS transistors suspended on released dielectric membranes are presented and fully characterized as a concluding demonstrator of the co-integration in SOI technology.