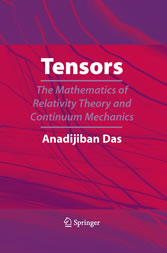 Tensors - The Mathematics of Relativity Theory and Continuum Mechanics

Tensors - The Mathematics of Relativity Theory and Continuum Mechanics

Here is a modern introduction to the theory of tensor algebra and tensor analysis. It discusses tensor algebra and introduces differential manifold. Coverage also details tensor analysis, differential forms, connection forms, and curvature tensor. In addition, the book investigates Riemannian and pseudo-Riemannian manifolds in great detail. Throughout, examples and problems are furnished from the theory of relativity and continuum mechanics.


Anadi Das is a Professor Emeritus at Simon Fraser University, British Columbia, Canada.  He earned his Ph.D. in Mathematics and Physics from the National University of Ireland and his D.Sc. from Calcutta University.  He has published numerous papers in publications such as the Journal of Mathematical Physics and Foundation of Physics.  His book entitled The Special Theory of Relativity: A Mathematical Exposition was published by Springer in 1993.