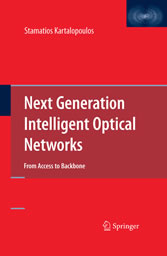 Next Generation Intelligent Optical Networks - From Access to Backbone

Next Generation Intelligent Optical Networks - From Access to Backbone

Optical networks have been in commercial deployment since the early 1980s as a result of advances in optical, photonic, and material technologies. Although the initial deployment was based on silica ?ber with a single wavelength modulated at low data rates, it was quickly demonstrated that ?ber can deliver much more bandwidth than any other transmission medium, twisted pair wire, coaxial cable, or wireless. Since then, the optical network evolved to include more exciting technologies, gratings, optical ?lters, optical multiplexers, and optical ampli?ers so that today a single ?ber can transport an unprecedented aggregate data rate that exceeds Tbps, and this is not the upper limit yet. Thus, the ?ber optic network has been the network of choice, and it is expected to remain so for many generationsto come, for both synchronousand asynchronouspayloads; voice, data, video, interactive video, games, music, text, and more. In the last few years, we have also witnessed an increase in network attacks as a result of store andforwardcomputer-basednodes. These attackshave manymaliciousobjectives:harvestsomeone else's data, impersonate another user, cause denial of service, destroy ?les, and more. As a result, a new ?eld in communicationis becomingimportant,communicationnetworksand informationse- rity. In fact, the network architect and system designer is currently challenged to include enhanced features such as intruder detection, service restoration and countermeasures, intruder avoidance, and so on. In all, the next generation optical network is intelligent and able to detect and outsmart malicious intruders.