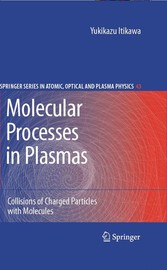 Molecular Processes in Plasmas - Collisions of Charged Particles with Molecules

Molecular Processes in Plasmas - Collisions of Charged Particles with Molecules

A variety of plasmas include molecules rather than only ions or atoms. Examples are ionospheres of the Earth and other planets, stellar atmospheres, gaseous discharges for use in various devices and processes, and fusion plasmas in the edge region. This book describes the role of molecules in those plasmas by showing elementary collision processes involving those molecules.


The author graduated from the Physics Department, University of Tokyo. As a PhD thesis, he studied the theoretical plasma physics. He has been working at the Institute of Space and Astronautical Science (before the organizational change in 1982, the Institute of Space and Aeronautical Science, University of Tokyo) for more than thirty years. He is now the professor emeritus at the Institute. His main interest is in the theoretical atomic and molecular physics, particularly on the electron or photon collisions with molecules. He is also interested in the application of the atomic and molecular physics to other fields (space science, plasma physics, radiation interaction with matter, etc.). He has personally organized an activity of compilation of cross section data. He published, with his colleagues, data reviews on electron collisions with molecules such as N2, O2, CO2, and H2O. He served as the editor of the volume of the Landolt Börnstein series on electron/photon collisions with atoms, molecules, and ions.