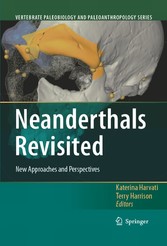 This volume presents the cutting-edge research of leading scientists, re-examining the major debates in Neanderthal research with the use of innovative methods and exciting new theoretical approaches. Coverage includes the re-evaluation of Neanderthal anatomy, inferred adaptations and habitual activities, developmental patterns, phylogenetic relationships, and the Neanderthal extinction; new methods include computer tomography, 3D geometric morphometrics, ancient DNA and bioenergetics. The book offers fresh insight into both Neanderthals and modern humans.


Katerina Harvati is senior researcher at the Max Planck Institute for Evolutionary Anthropology and adjunct Associate Professor at the Anthropology Department of the City University of New York Graduate School. Dr. Harvati is a paleoanthropologist specializing in Neanderthal evolution and modern human origins. Her broader research interests include primate and human evolution, evolutionary theory, life history and paleolithic archaeology. She has conducted fieldwork in Europe and Africa and is currently directing paleoanthropological research in Northern Greece. Her work has been published in the Proceedings of the National Academy of Sciences (USA), the Journal of Human Evolution, the American Journal of Physical Anthropology and elsewhere.
Terry Harrison is Professor of Anthropology and Director of the Center for the Study of Human Origins at New York University. His main research interests include all aspects of human and primate evolution. He has conducted paleontological field research in Europe, East Africa, and Asia, and he is currently directing research at the early hominin locality of Laetoli in Tanzania. He has published extensively on the evolutionary relationships and paleobiology of Miocene hominoids, East African vertebrate paleontology, and comparative anatomy. He is the editor of Neogene Paleontology of the Manonga Valley, Tanzania (Plenum Press).