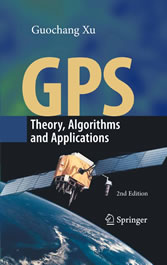 This, the second edition of the hugely practical reference and handbook describes kinematic, static and dynamic Global Positioning System theory and applications. It is primarily based upon source-code descriptions of the KSGSoft program developed by the author and his colleagues and used in the AGMASCO project of the EU. This is the first book to report the unified GPS data processing method and algorithm that uses equations for selectively eliminated equivalent observations.


Guochang Xu graduated in mathematics and geodesy from Wuhan University and the Chinese Academy of Sciences (CAS) in 1982 and 1984 respectively. He obtained his doctorate from the Technical University Berlin in 1992. Having worked as a scientist at the GeoForschungsZentrum (GFZ) Potsdam from 1993 to 1998 and as a senior scientist at the National Survey and Cadastre, Denmark, from 1998 to 1999, he returned to the GFZ as a senior scientist in 1999. He has been involved in GPS research since 1993 and has authored and co-authored several books and software. He is also an overseas assessor of CAS and the Chinese Education Ministry and an adjunct professor of ChangAn University and CAS.