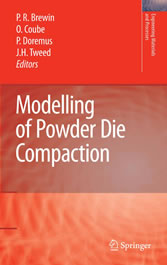 Manufacture of components from powders frequently requires a compaction step. Modelling of Powder Die Compaction presents a number of case studies that have been developed to test compaction models. It will be bought by researchers involved in developing models of powder compaction as well as by those working in industry, either using powder compaction to make products or using products made by powder compaction.


The editors have worked together as part of a European networking project aimed at improving powder die compaction using compaction simulation. Peter Brewin co-ordinated the network; while Olivier Coube, Pierre Doremus and James Tweed led the activities of: simulation of powder compaction; generation of input data for powder compaction models; and the generation of case studies and data to test compaction models.
Peter Brewin is technical coordinator of Dienet Thematic Network and technical director of the European Powder Metallurgy Association (EPMA). His background is in alloy steel manufacturing including liquid phase sintering.
Olivier Coube is a R&D mechanical engineer (Ph.D.) with over 10 years of experience in the field of the powder forming process (pressing, sintering and sizing) utilizing mathematical modeling and numerical simulation to solve product development issues. From 1998 to 2004, he led numerous applied research projects for industrial and government contractors at the Fraunhofer-Institute for Mechanics of Materials. Since July 2004 he has been working at Plansee AG as an expert in Numerical Simulation.
Pierre Doremus has worked in Laboratory 3S of the National Polytechnic Institute of Grenoble for 25 years. His research activities are essentially devoted to powder compaction. He has been the supervisor of several Ph.D. students which provided him with the idea of developing academic experimental installations for studying powder densification. This work has always been in relation to the industry or national and European programs. This has led to many publications in scientific journals and conferences.
James Tweed has worked for AEA Technology on a broad range of topics related to the manufacture and performance of materials. Recently he has led work with the Universities of Leicester and Swansea on developing test methods relevant to the manufacture of components by die compaction. This includes assessment of powders and the way they flow and fill dies, as well as their behavior during compaction and ejection. This work has also identified methods for assessing the density distribution in powder compacts.