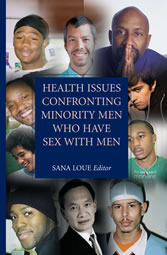 Health Issues Confronting Minority Men Who Have Sex with Men

Health Issues Confronting Minority Men Who Have Sex with Men

Here is an important work that uniquely focuses on both gay/queer-self-identified men from diverse minority communities (African American, Latino, Native American, Asian and Pacific Islander) and men of these ethnic communities who have sex with men but are not gay/queer-self-identified. Each section of this edited book is devoted to a particular health issue affecting minority MSM, and consists of one or more scholarly chapters that address the particular issue.


Sana Loue, J.D., Ph.D., M.P.H. is known internationally for her HIV research with minority communities, as well as research ethics and epidemiology. She currently facilitates a group for minority MSM around issues of partner violence and abuse and is the Principal Investigator of a foundation-funded study examining the co-occurrence of mental illness and HIV risk among African-American men who have sex with men. She has authored/edited several books with Springer, including: Encyclopedia of Aging and Public Health, Case Studies in Ethics and HIV Research, Assessing Race, Ethnicity, and Gender in Health, and Sexual Partnering, Sexual Practices, and Health.