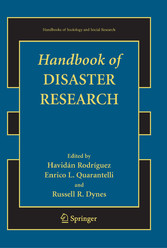 "Recent disasters, such as the 2004 Indian Ocean Tsunami, bomb explosions in London, Hurricane Katrina, the Pakistan Earthquake, floods in Central America, and landslides in Indonesia, among many others, have resulted in an extensive loss of life, social disruption, significant economic impacts to local and national economies, and have made headline news in countries throughout the world. Thus the Handbook of Disaster Research is a timely and much needed contribution to the field of disasters. The editors of this Handbook have brought together a comprehensive and interdisciplinary volume with a diverse and international group of contributors. The Handbook is based on the principle that disasters are social constructions and focuses on social science disaster research. Attention is given to conceptual issues dealing with the concept ""disaster"" and to methodological issues relating to research on disasters, including Geographic Information Systems as a useful research tool and its implications for future research, how disaster research is increasingly being used in the emergency management curriculum, and how research is useful in dealing with emergency operations. The Handbook also includes a number of essays focusing on various types of vulnerabilities. In addition, there are discussions on community processes that are evoked by disasters, including warnings, search and rescue, coordination, and organizational adaptation, as well as, dealing with death and injury, and recovery, and the role of the media in disasters, special attention is given to emergency systems in several nation states. The Handbook also includes contributions focusing on the relationship between disaster and development, the popular culture of disasters, new dimensions of disaster research, as well as projections of disasters into the future. Disasters allow the opportunity for social scientists to study human behavior in which adaptation, resilience and innovation are often more clearly revealed than in 'normal' and stable times. The Handbook of Disaster Research provides an interdisciplinary and international approach to disasters with theoretical, methodological, and practical applications."