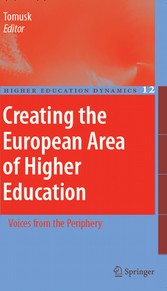 Creating the European Area of Higher Education - Voices from the Periphery

Creating the European Area of Higher Education - Voices from the Periphery

Since 1999 European higher education has been engaged in the most radical reform of its 900 years of history. This volume brings together a group of higher education researchers across Europe and looks into the implementation of the Bologna Process in the countries often attributed a peripheral status. In addition to cultural and political issues, the volume pays particular attention to the role of students as well as the changing position of the intellectuals under its impact.