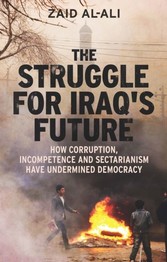 Struggle for Iraq's Future - How Corruption, Incompetence and Sectarianism Have Undermined Democracy

Struggle for Iraq's Future - How Corruption, Incompetence and Sectarianism Have Undermined Democracy

Many Westerners have offered interpretations of Iraq's nation-building progress in the wake of the 2003 war and the eventual withdrawal of American troops from the country, but little has been written by Iraqis themselves. This forthright book fills in the gap. Zaid al-Ali, an Iraqi lawyer with direct ties to the people of his homeland, to government circles, and to the international community, provides a uniquely insightful and up-to-date view of Iraq's people, their government, and the extent of their nation's worsening problems. ? The true picture is discouraging: murderous bombings, ever-increasing sectarianism, and pervasive government corruption have combined to prevent progress on such crucial issues as security, healthcare, and power availability. Al-Ali contends that the ill-planned U.S. intervention destroyed the Iraqi state, creating a black hole which corrupt and incompetent members of the elite have made their own. And yet, despite all efforts to divide them, Iraqis retain a strong sense of national identity, al-Ali maintains. He reevaluates Iraq's relationship with itself, discusses the inspiration provided by the events of the Arab Spring, and redefines Iraq's most important struggle to regain its viability as a nation.