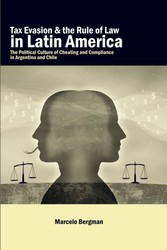 Few tasks are as crucial for the future of democracy in Latin Americaand, indeed, in other underdeveloped areas of the worldas strengthening the rule of law and reforming the system of taxation.In this book, Marcelo Bergman shows how success in getting citizens to pay their taxes is related intimately to the social norms that undergird the rule of law. The threat of legal sanctions is itself insufficient to motivate compliance, he argues. That kind of deterrence works best when citizens already have other reasons to want to comply, based on their beliefs about what is fair and about how their fellow citizens are behaving. The problem of free riding, which arises when cheaters can count on enough suckers to pay their taxes so they can avoid doing so and still benefit from the government's supply of public goods, cannot be reversed just by stringent law, because the success of governmental enforcement ultimately depends on the social equilibrium that predominates in each country. Culture and state effectiveness are inherently linked.Using a wealth of new data drawn from his own multidimensional research involving game theory, statistical models, surveys, and simulations, Bergman compares Argentina and Chile to show how, in two societies that otherwise share much in common, the differing traditions of rule of law explain why so many citizens evade paying taxes in Argentinaand why, in Chile, most citizens comply with the law. In the concluding chapter, he draws implications for public policy from the empirical findings and generalizes his argument to other societies in Africa, Asia, and Eastern Europe.