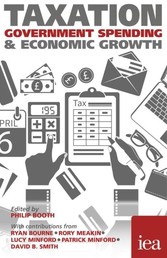 Amidst the debates about 'austerity' a number of vital debates in public finance have been sidelined. Because the reductions in government spending - small though they have been so far- have been designed to reduce the government's borrowing requirement, there has been little discussion of whether the size of the state should be reduced in order to facilitate long-run reductions in the burden of taxation. This book traces the history of the growth of the size of the state over the last 100 years whilst also making international comparisons. There is a particular focus on recent and projected future developments which shows that, though the total level of government spending has not decreased significantly in recent years, there has been a big redirection of spending from some areas to others. The authors then examine the evidence on the relationship between taxation and economic growth. As well as reviewing recent literature, they also undertake new modelling that higher taxes are detrimental for growth. In the final part of the book, the whole UK tax system is reconsidered in a proper economic framework. The UK has one of the world's most complex tax systems and its incoherence has increased over the last five years. Sweeping reforms are proposed to the system which wold involve abolishing around 20 taxes and the development of a simple, predictable tax system based on principles that should gain wide acceptance.