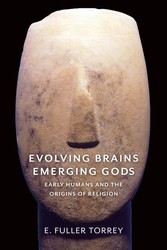 Religions and mythologies from around the world teach that God or gods created humans. Atheist, humanist, and materialist critics, meanwhile, have attempted to turn theology on its head, claiming that religion is a human invention. In this book, E. Fuller Torrey draws on cutting-edge neuroscience research to propose a startling answer to the ultimate question. Evolving Brains, Emerging Gods locates the origin of gods within the human brain, arguing that religious belief is a byproduct of evolution.Based on an idea originally proposed by Charles Darwin, Torrey marshals evidence that the emergence of gods was an incidental consequence of several evolutionary factors. Using data ranging from ancient skulls and artifacts to brain imaging, primatology, and child development studies, this book traces how new cognitive abilities gave rise to new behaviors. For instance, autobiographical memory, the ability to project ourselves backward and forward in time, gave Homo sapiens a competitive advantage. However, it also led to comprehension of mortality, spurring belief in an alternative to death. Torrey details the neurobiological sequence that explains why the gods appeared when they did, connecting archaeological findings including clothing, art, farming, and urbanization to cognitive developments. This book does not dismiss belief but rather presents religious belief as an inevitable outcome of brain evolution. Providing clear and accessible explanations of evolutionary neuroscience, Evolving Brains, Emerging Gods will shed new light on the mechanics of our deepest mysteries.