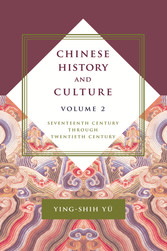 Chinese History and Culture is an indispensable two-volume resource for scholars of China. The books arrange the most significant works of a legendary Sinologist into a comprehensive course on Chinese civilization. Volume 2 of Chinese History and Culture completes Ying-shih Ys systematic reconstruction and exploration of Chinese thought over two millennia and its impact on Chinese identity. Essays address the rise of Qing Confucianism, the development of the Dai Zhen and Zhu Xi traditions, and the response of the historian Zhang Xuecheng to the Dai Zhen approach. They take stock of the thematic importance of Cao Xueqins eighteenth-century masterpiece Honglou meng (Dream of the Red Chamber) and the significant influence of Sun Yat-sens Three Principles of the People, as well as the radicalization of China in the twentieth century and the fundamental upheavals of modernization and revolution.Ying-shih Y also discusses the decline of elite culture in modern China, the relationships among democracy, human rights, and Confucianism, and changing conceptions of national history. He reflects on the Chinese approach to history in general and the larger political and cultural function of chronological biographies. He situates Chinas modern encounter with the West in a wider historical frame to explain its more curious turns, and he contemplates the importance of a renewed interest in the traditional Chinese values recognizing common humanity and human dignity.