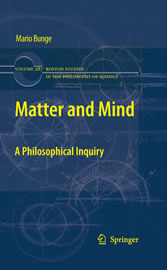 Matter and Mind - A Philosophical Inquiry

Matter and Mind - A Philosophical Inquiry

This book discusses two of the oldest and hardest problems in both science and philosophy: What is matter?, and What is mind? A reason for tackling both problems in a single book is that two of the most influential views in modern philosophy are that the universe is mental (idealism), and that the everything real is material (materialism). Most of the thinkers who espouse a materialist view of mind have obsolete ideas about matter, whereas those who claim that science supports idealism have not explained how the universe could have existed before humans emerged. Besides, both groups tend to ignore the other levels of existence-chemical, biological, social, and technological. If such levels and the concomitant emergence processes are ignored, the physicalism/spiritualism dilemma remains unsolved, whereas if they are included, the alleged mysteries are shown to be problems that science is treating successfully.