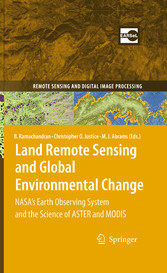 Land Remote Sensing and Global Environmental Change: The Science of ASTER and MODIS is an edited compendium of contributions dealing with ASTER and MODIS satellite sensors aboard NASA's Terra and Aqua platforms launched as part of the Earth Observing System fleet in 1999 and 2002 respectively. This volume is divided into six sections. The first three sections provide insights into the history, philosophy, and evolution of the EOS, ASTER and MODIS instrument designs and calibration mechanisms, and the data systems components used to manage and provide the science data and derived products. The latter three sections exclusively deal with ASTER and MODIS data products and their applications, and the future of these two classes of remotely sensed observations.

Bhaskar Ramachandran is a senior scientist who supports the NASA Earth Observing System (EOS) science mission at the Earth Resources and Observation Science (EROS) Center at the U.S. Geological Survey in Sioux Falls, South Dakota. He currently supports the MODIS science mission, and has performed similar roles for the Landsat-7 and ASTER missions in the past. His current research interests include the use of semantic web capabilities, and building ontologies to represent geospatial science knowledge domains. Chris Justice is a Professor and Research Director at the Geography Department of the University of Maryland. He is the land discipline chair for the NASA MODIS Science Team and is responsible for the MODIS Fire Product. He is a member of the NASA NPOESS Preparatory Project (NPP) Science Team. He is the NASA Land Cover Land Use Change Program Scientist. His current research is on land cover and land use change, the extent and impacts of global fire, global agricultural monitoring, and their associated information technology and decision support systems. Michael Abrams received his degrees in Biology and Geology from the California Institute of Technology. Since 1973 he has worked at NASA's Jet Propulsion Laboratory in geologic remote sensing. He served on the science team for many instruments, including Skylab, HCMM, Landsat, and EO-1. Areas of specialization are mineral exploration, natural hazards, volcanology, and instrument validation. He has been on the US/Japan ASTER Science Team since 1988, and became the ASTER Science Team Leader in 2003.