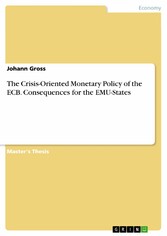 The Crisis-Oriented Monetary Policy of the ECB. Consequences for the EMU-States

The Crisis-Oriented Monetary Policy of the ECB. Consequences for the EMU-States


Master's Thesis from the year 2015 in the subject Economics - Monetary theory and policy, grade: 1, University of applied sciences, Nürnberg, course: International Management, language: English, abstract: With the launch of the Eurozone as a monetary union and the EU as a supranational amalgamation of sovereign countries, the European debt crisis tangents nearly all member states and does not limit itself to several countries. Exactly here the shoe pinches, as former national problems transferred into international challenges with economic and social costs for a higher group of states which have to bear the consequences. The first problem is, that the stability-oriented monetary policy of the ECB turned into crisis-oriented operations and unconventional monetary decisions which potentially will convert in real consequences for the EMU states and cause economic costs. Second, the European debt crisis is not solved by bailing out countries like the PIIGS states, as governments still increase their public debts, the EU and its institutions only achieve a suspension of the problem but does not resolve it by the roots. Most of the so called PIIGS states, did not use the low-interest period to remove the debt level and to reform their economic structure for a higher economic competitiveness which would have an effect on the GDP. Rather, some states increased their public debts and had a decrease in the GDP, which definitely turns into a grave situation.