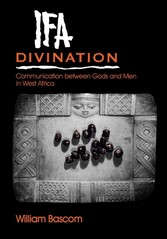 Ifa Divination - Communication between Gods and Men in West Africa

Ifa Divination - Communication between Gods and Men in West Africa

",The sacred texts of Ifa, repository of the accumulated wisdom of countless generations of Yoruba people, are an invaluable source not only for all students of African oral literature and Yoruba civilization, but also for future generations interested in the continuing vitality of Ifa divination and a Yoruba way of life and thought.", -Henry DrewalThis landmark study of Ifa, the most important and elaborate system of divination of the Yoruba people of Nigeria, remains a monumental contribution to scholarship in anthropology, folklore, religion, philosophy, linguistics, and African and African-American studies.