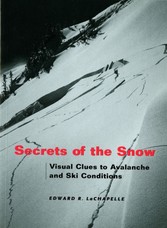 Secrets of the Snow - Visual Clues to Avalanche and Ski Conditions

Secrets of the Snow - Visual Clues to Avalanche and Ski Conditions

The surface of fallen snowits contours and texturecan tell the interested observer much about the forces that shaped it and about its stability and what it is likely to do. Will it be good for skiing or for packing as a snowball? Will it slide? Is it dangerous?Secrets of the Snow is an overview of the easily visible aspects of snow in the alpine mountain landscape, serving as a companion volume to the authors Field Guide to Snow Crystals, which examines snow at the microscopic level. Describing visual snow features and textures arising from climate, wind-drift, layering, solar radiation, and melting, Secrets of the Snow explains how snow may be ",read", for information on avalanche formation and suitability for winter sports.Closely linked photographs and text illustrate the shapes, forms, and textures found at the surface of winter snow covers, describe their origins in wind and weather conditions, and guide the reader in interpreting these features to predict snow behavior. Secrets of the Snow is essential for winter sports enthusiasts, mountaineers, and avalanche-safety specialists.