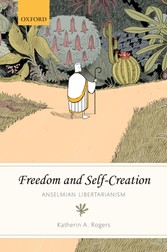 Katherin A. Rogers presents a new theory of free will, based on the thought of Anselm of Canterbury. We did not originally produce ourselves. Yet, according to Anselm, we can engage in self-creation, freely and responsibly forming our characters by choosing from ourselves (a se) between open options. Anselm introduces a new, agent-causal libertarianism which is parsimonious in that, unlike other agent-causal theories, it does not appeal to any unique andmysterious powers to explain how the free agent chooses. After setting out Anselms original theory, Rogers defends and develops it by addressing a series of standard problems levelled against libertarianism. These include the problem of internalism--in that an agent is not the source of his originalmotivations, how can the structure of his choice ground his responsibility?, the problem of Frankfurt-style counterexamples--Do we really need open options to choose freely?, and the problem of luck--If nothing about an agent before he chooses explains his choice, then isnt the choice just dumb luck? (The Anselmian answer to this perennial criticism is especially innovative, proposing that the critic has the relationship between choices and character exactly backwards.) Finally, as a theoryabout self-creation, Anselmian Libertarianism must defend the tracing thesis, the claim that an agent can be responsible for character-determined choices, if he, himself, formed his character through earlier a se choices. Throughout, the book defends and exemplifies a new methodological suggestion:someone debating free will ought to make his background world view explicit. In the on-going debate over the possibility of human freedom and responsibility, Anselmian Libertarianism constitutes a new and plausible approach.