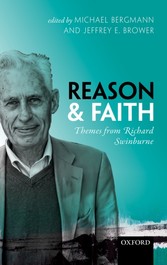 The past fifty years have been an enormously fruitful period in the field of philosophy of religion, and few have done more to advance its development during this time than Richard Swinburne. His pioneering work in philosophy of religion is distinguished, not only for the way in which it systematically develops a comprehensive set of positions within this field, but also for the way in which it builds on and contributes to contemporary work in other fields, such asmetaphysics, epistemology, and philosophy of science.This volume presents a collection of ten new essays in philosophy of religion that develop and critically engage themes from Swinburnes work. Written by some of the leading figures in the field, these essays focus on issues in both natural theology (dealing with what can be known about God and his relation to the world independently of any particular religious tradition or revelation) and philosophical theology (reflecting critically on the doctrines associated with particular religioustraditions). The first six essays address topics familiar from natural theology (faith, theistic arguments, and divine power). The last four essays address topics bearing on philosophical theology (atonement, liturgy, immortality, and the nature of body and soul).