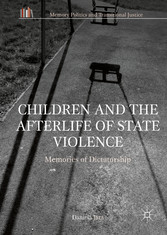 Children and the Afterlife of State Violence - Memories of Dictatorship

Children and the Afterlife of State Violence - Memories of Dictatorship

This book examines memories of political violence in Chile after the 1973 coup and a 17-years-long dictatorship. Based on individual and group interviews, it focuses on the second generation children, adults today, born to parents who were opponents of Pinochet´s regime. Focusing on their lived experience, the intersection between private and public realms during Pinochet's politics of fear regime, and the afterlife of violence in the post-dictatorship, the book is concerned with new dilemmas and perspectives that stem from the intergenerational transmission of political memories. It reflects critically on the role of family memories in the broader field of memory in Chile, demonstrating the dynamics of how later generations appropriate and inhabit their family political legacies. The book suggests how the second generation cultural memory redefines the concept of victimhood and propels society into a broader process of recognition.