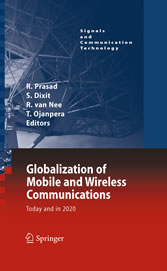 Globalization of Mobile and Wireless Communications - Today and in 2020

Globalization of Mobile and Wireless Communications - Today and in 2020

Globalization of Mobile and Wireless Communications is a collection of cutting-edge research in mobile and wireless communications with impact on developments as far forward as 2020 and beyond. The book draws upon the insights and performed research work of leading experts in the field. Topics of discussion are related but not limited to spectrum-efficient radio interface technologies, enabling technologies for reconfigurability, wireless sensor networks, cognitive networks, coherent wireless transmission, algorithmic design, middleware for novel services and applications. The material has been edited to provide a vision for the future of mobile and wireless, towards a dynamic communication system that breaks down the barriers between communications means; and evolves and integrates business models and culture to match the technological evolution. In addition, strategies on how to overcome the technological challenges for achieving that vision are also outlined.


Ramjee Prasad is currently the Director of Center for Teleinfrastruktur (CTIF), and holds the chair of wireless information and multimedia communications. He is coordinator of European Commission Sixth Framework Integrated Project MAGNET Beyond (My personal Adaptive Global NET Beyond). He was involved in the European ACTS project FRAMES (Future Radio Wideband Multiple Access Systems) as a project leader. He is a project leader of several international, industrially funded projects. He has published over 500 technical papers, contributed to several books, and has authored, coauthored, and edited 19 books. His latest book is '4G Roadmap and Emerging Communications Technologies'.
Prof. Prasad has served as a member of the advisory and program committees of several IEEE international conferences. He has also presented keynote speeches, and delivered papers and tutorials on WPMC at various universities, technical institutions, and IEEE conferences. He was also a member of the European cooperation in the scientific and technical research (COST-231) project dealing with the evolution of land mobile radio (including personal) communications as an expert for The Netherlands, and he was a member of the COST-259 project. He was the founder and chairman of the IEEE Vehicular Technology/Communications Society Joint Chapter, Benelux Section, and is now the honorary chairman. In addition, Prof. Prasad is the founder of the IEEE Symposium on Communications and Vehicular Technology (SCVT) in the Benelux, and he was the symposium chairman of SCVT'93. Presently, he is the Chairman of IEEE Vehicular Technology/Communications/Information Theory/Aerospace and Electronics Systems/Society Joint Chapter, Denmark Section.
In addition, Prof. Prasad is the coordinating editor and editor-in-chief of the Springer International Journal on Wireless Personal Communications. He was the technical program chairman of the PIMRC'94 International Symposium held in The Hague, The Netherlands, from September 19--23, 1994 and also of the Third Communication Theory Mini-Conference in Conjunction with GLOBECOM'94, held in San Francisco, California, from November 27--30, 1994. He was the conference chairman of the fiftieth IEEE Vehicular Technology Conference and the steering committee chairman of the second International Symposium WPMC, both held in Amsterdam, The Netherlands, from September 19--23, 1999. He was the general chairman of WPMC'01 which was held in Aalborg, Denmark, from September 9--12, 2001, and of the first International Wireless Summit (IWS 2005) held also in Aalborg, Denmark on September 17--22, 2005.
Prof. Prasad was also the founding chairman of the European Center of Excellence in Telecommunications, known as HERMES and now he is the honorary chairman. He is a a Fellow of IEEE , a fellow of IET, a fellow of IETE, a member of The Netherlands Electronics and Radio Society (NERG), and a member of IDA (Engineering Society in Denmark). Prof. Prasad is advisor to several multinational companies. He has received several international awards; just to mention the 'Telenor Nordic 2005 Research Prize'.
Sudhir Dixit received the B.E. degree from Maulana Azad National Institute of Technology (MANIT), Bhopal, India, the M.E. degree from Birla Institute of Technology and Science (BITS), Pilani, India, the Ph.D. degree from the University of Strathclyde, Glasgow, U.K., and the M.B.A. degree from the Florida Institute of Technology, Melbourne.
From 1996 to October 2003, he was a Senior Research Manager and from November 2003 to March 2007, he was a Research Fellow at Nokia Research Center (NRC). He is currently Director of HP Labs India. Prior to joining Nokia, he was with NYNEX Science and Technology (now Verizon), GTE (now Verizon), Codex Motorola, Wang, Harris, and Standard Telecommunication Laboratories (now Nortel Europe) in various management and technical positions. He has published or presented over 160 papers, published four books, and is the holder of 17 patents. Dr. Dixit has been a Guest Editor over a dozen times in various IEEE and other publications. He serves on the Editorial Board of the IEEE Communications Magazine, Wireless Personal Communications: An International Journal (WIRE) (Amsterdam, The Netherlands: Kluwer), Wireless Communications and Mobile Computing Journal (Hoboken, NJ: Wiley), and is a Co-editor of The Cambridge Wireless Essentials Series (Cambridge, U.K.: Cambridge University Press). He also serves as an Advisory Committee Chair of Ubiquitous Computing and Monitoring System (UCoMS) for Discovery of Energy Resources, a project that is funded by the U.S. DoE and the State of Louisiana. He is a Fellow of the IEEE (USA), the IET (U.K.), and the IETE (India). He represents Nokia Siemens Networks on the Steering Board of the Wireless World Research Forum (WWRF), and is also the Chair of its Vision Committee and the Special Interest Group on Self-Organization of Wireless World Systems.
Richard van Nee received the M.Sc. degree in Electrical Engineering from Twente University in Enschede, the Netherlands, in 1990. In May 1995, he received the PhD degree from Delft University of Technology. From 1995 to 200, he worked at Lucent Technologies Bell Labs on wireless LAN transmission techniques. He invented the CCK codes that are used in the IEEE 802.11b standard - which was the standard that let to the formation of WiFi. He co-developed the OFDM-based proposal that was adopted by the IEEE 802.11a wireless LAN standard in 1998. In 2001, he co-founded Airgo Networks - acquired by Qualcomm in 2006 - that developed the first MIMO-OFDM modem for wireless LAN and which became the basis of the IEEE 802.11n standard. Together with Ramjee Prasad, he wrote a book on OFDM, entitled 'OFDM for Mobile Multimedia Communications.' In 2002, he received the Dutch Veder award for his contributions to standardization of wireless communications.