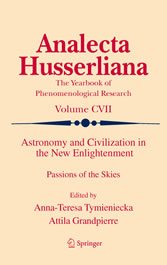 Astronomy and Civilization in the New Enlightenment - Passions of the Skies

Astronomy and Civilization in the New Enlightenment - Passions of the Skies

This volume represents the first which interfaces with astronomy as the fulcrum of the sciences. It gives full expression to the human passion for the skies. Advancing human civilization has unfolded and matured this passion into the comprehensive science of astronomy. Advancing science's quest for the first principles of existence meets the ontopoietic generative logos of life, the focal point of the New Enlightenment. It presents numerous perspectives illustrating how the interplay between human beings and the celestial realm has informed civilizational trends. Scholars and philosophers debate in physics and biology, the findings of which are opening a more inclusive, wider picture of the universe. The different models of the universal order and of life here presented, all aiming at the first principles of existence-accord with the phenomenology/ontopoiesis of life within the logos-prompted primogenital stream of becoming and action, which points to a future of progressing culture.