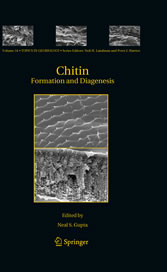 There are several books on properties of chitin and associated biomolecules and their biochemical significance. However, the present volume deals with a wide variety of biogeochemical and organic geochemical aspects of this vital macromolecule written by leading authors and experts in the field. Each chapter is carefully peer reviewed and is an updated account of recent research in isotopic, nanostructural, biochemical, microstructural, geochemical, paleontological and experimental aspects of chitin formation, distribution and preservation in the environment and earth history.

I studied Geology (Honours) at the University of Delhi (1998-2001) and moved to the University of Bristol to start a PhD in Geobiology and Organic Geochemsitry with Professor Derek Briggs, FRS and Dr. Richard D. Pancost. During my PhD I worked on the biomolecular transformation of organisms such as arthropods and leaves and the geochemistry of plant and arthropod fossils in an attempt to understand the fate of biopolymers such as chitin, lignin, cutin and proteins in modern organisms and their contribution to sedimentary organic matter. We conducted experimental heating experiments in the lab of Dr. Raymond Michels (CNRS-CREGU, Nancy, France) with modern organisms and their biopolymeric contituents to replicate the process in the laboratory. We were able to challenge the prevelant selective preservation model of organic matter preservation and propose the lipids present in organisms polymerise to form recalcitrant aliphatic components that preserve in sediments. Following completion of my PhD in 2005 I moved to Yale University as a Postdoc Associate and worked with Prof Derek Briggs on experimental organic taphonomy to replicate fossilisation processes in low temperature conditions to understand the lipid polymerisation process. We further explored the fate of proteinaceous organisms such as hemichordates in the geologic record and the organic chemistry of Eurypterids, amongst the largest arthopods that existed. After this I moved to MIT in 2007 in the lab of Professor Roger Summons, FRS and worked on the molecular transformation of cephalopods, the fate of plant biopolymers using Metasequoia as a model and the effect of heat on the stereochemistry of lipid organic molecules. In 2009 I moved to the Geophysical Laboratory, Carnegie Institution as a NASA Astrobiology Postdoctoral Fellow to conduct experimental work with Dr. George Cody. We conducted Scanning Transmission X-Ray microscopy-NEXAFS spectroscopy experiments at the Berkeley Lab, Berkeley, California on fossil scorpions 400 million years old and detected chitin in them to report the oldest known evidence of such biopolymers in the geologic record. I further conducted heating experiments on Cyanobacteria to understand the fossilisation potential of microbes and their contribution to sedimentary organic matter.