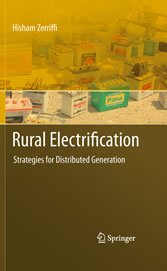 For those in developed nations, suddenly being without electricity is a disaster: power cuts have us fretting over the food stored in the freezer, and even a few hours without lights, televisions, or air conditioning is an ordeal. However, for an estimated 1.6 billion people worldwide, the absence of electricity is their daily experience. An untold number of others live with electricity that is erratic and of poor quality. How can electric power be brought into their lives when the centralized utility models that have evolved in developed nations are not an economically viable option? Poor, rural communities in developing nations cannot simply be 'plugged in' to a grid.
Small-scale Distributed Generation (DG), ranging from individual solar home systems to village level grids run off diesel generators, could provide the answer, and this book compares around 20 DG enterprises and projects in Brazil, Cambodia and China, each of which is considered to be a 'business model' for distributed rural electrification. While large, centralized power projects often rely on big subsidies, this study shows that privately run and localized solutions can be both self-sustaining and replicable. Its three sections provide a general introduction to the issue of electrification and rural development, set out the details of the case studies and compare the models involved, and discuss the important thematic issues of equity, access to capital and cost-recovery.
Hisham Zerriffi shows that in each case, it is not simply a matter of matching a particular technology to a particular need. Numerous institutional factors come into play including the regulatory regime, access to financial services, and government/utility support or opposition to the DG alternative. Despite this, in many countries, the question is not whether DG has a role to play. Rather it is a question of how it will play a role.


Hisham Zerriffi is an Assistant Professor and the Ivan Head South/North Research Chair in the Liu Institute for Global Issues, University of British Columbia. Prior to joining the UBC Faculty, Dr. Zerriffi was a Postdoctoral Fellow with the Program on Energy and Sustainable Development, where he led a project on the role of institutions in the deployment and diffusion of small-scale energy technologies. Dr. Zerriffi holds a PhD in Engineering and Public Policy from Carnegie Mellon University (Pittsburgh, Pennsylvania).