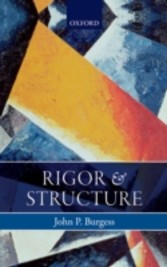 While we are commonly told that the distinctive method of mathematics is rigorous proof, and that the special topic of mathematics is abstract structure, there has been no agreement among mathematicians, logicians, or philosophers as to just what either of these assertions means. John P. Burgess clarifies the nature of mathematical rigor and of mathematical structure, and above all of the relation between the two, taking into account some of the latest developmentsin mathematics, including the rise of experimental mathematics on the one hand and computerized formal proofs on the other hand. The main theses of Rigor and Structure are that the features of mathematical practice that a large group of philosophers of mathematics, the structuralists, have attributedto the peculiar nature of mathematical objects are better explained in a different way, as artefacts of the manner in which the ancient ideal of rigor is realized in modern mathematics. Notably, the mathematician must be very careful in deriving new results from the previous literature, but may remain largely indifferent to just how the results in the previous literature were obtained from first principles. Indeed, the working mathematician may remain largely indifferent to just what the firstprinciples are supposed to be, and whether they are set-theoretic or category-theoretic or something else. Along the way to these conclusions, a great many historical developments in mathematics, philosophy, and logic are surveyed. Yet very little in the way of background knowledge on the part of thereader is presupposed.