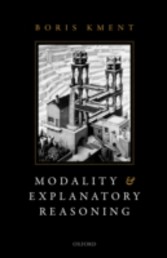 Since the ground-breaking work of Saul Kripke, David Lewis, and others in the 1960s and 70s, one dominant interest of analytic philosophers has been in modal truths, which concern the question what is possible and what is necessary. However, there is considerable controversy over the source and nature of necessity. In Modality and Explanatory Reasoning, Boris Kment takes a novel approach to the study of modality that places special emphasis on understandingthe origin of modal notions in everyday thought. Kment argues that the concepts of necessity and possibility originate in a common type of thought experiment--counterfactual reasoning--that allows us to investigate explanatory connections. This procedure is closely related to the controlled experiments of empirical science. Necessity is defined in terms of causation and other forms of explanation such as grounding, the relation that connects metaphysically fundamental facts to non-fundamental ones. Therefore, contrary to a widespread view,explanation is more fundamental than modality. The study of modal facts is important for philosophy, not because these facts are of much metaphysical interest in their own right, but because they provide evidence about explanatory relationships. In the course of developing this position, the book offers new accounts of possible worlds, counterfactual conditionals, essential truths and their role in grounding, and a novel theory of how counterfactuals relate to causation and explanation.