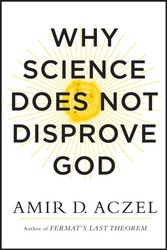 Why Science Does Not Disprove God

Why Science Does Not Disprove God

The renowned science writer, mathematician, and bestselling author of Fermats Last Theorem masterfully refutes the overreaching claims the New Atheists, providing millions of educated believers with a clear, engaging explanation of what science really says, how theres still much space for the Divine in the universe, and why faith in both God and empirical science are not mutually exclusive.A highly publicized coterie of scientists and thinkers, including Richard Dawkins, the late Christopher Hitchens, and Lawrence Krauss, have vehemently contended that breakthroughs in modern science have disproven the existence of God, asserting that we must accept that the creation of the universe came out of nothing, that religion is evil, that evolution fully explains the dazzling complexity of life, and more. In this much-needed book, science journalist Amir Aczel profoundly disagrees and conclusively demonstrates that science has not, as yet, provided any definitive proof refuting the existence of God.Why Science Does Not Disprove God is his brilliant and incisive analyses of the theories and findings of such titans as Albert Einstein, Roger Penrose, Alan Guth, and Charles Darwin, all of whose major breakthroughs leave open the possibility and even the strong likelihoodof a Creator. Bolstering his argument, Aczel lucidly discourses on arcane aspects of physics to reveal how quantum theory, the anthropic principle, the fine-tuned dance of protons and quarks, the existence of anti-matter and the theory of parallel universes, also fail to disprove God.