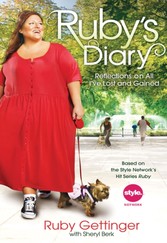 Ruby's Diary - Reflections on All I've Lost and Gained

Ruby's Diary - Reflections on All I've Lost and Gained

Ruby Gettinger, the endearing and beloved star of The Style Network's hit reality show Ruby, reveals the most private aspects of her life-altering journey to conquer morbid obesity and to attain health and happiness in this inspirational book based on her personal diaryFrom the debut of The Style Network's number one reality show Ruby, viewers fell in love with its sweet and spirited Southern star, and remain mesmerized by her public mission to overcome her inner conflicts and win her ongoing battle with weight.At her heaviest, Ruby weighed more than 700 pounds. Although she wasn't quite sure how she got to this pointor whyone thing was clear: it was killing her. Her doctor warned that her diabetes was raging out of control and that she could die at any moment. Vowing to change her life to save it, Ruby made a genuine commitment to uncover all of the underlying physical and psychological causes of her food addictionan act of courage that has helped her lose nearly 400 pounds so far! To support her on this difficult path, Ruby has kept a journal of her experiences, including intimate reflections, surprising discoveries, and current fears, hopes, and dreams, many of which she shares here.Filled with honesty, optimism, and classic "Rubyisms" as well as revealing insights from her friends, family, and team of experts, Ruby's Diary is a remarkable record of one determined woman's complex challenges and her many laudable achievements. Ruby's perseverance is not only an example to all those battling their own weight and addiction issues, it is an example to all those grappling with personal obstacles of any kind. Anyone not in love with Ruby just hasn't met her yet!