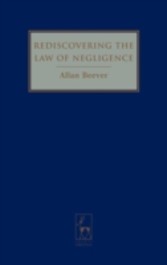 Rediscovering the Law of Negligence

Rediscovering the Law of Negligence

Rediscovering the Law of Negligence offers a systematic and theoretical exploration of the law of negligence. Its aim is to re-establish the notion that thinking about the law ought to and can proceed on the basis of principle. As such, it is opposed to the prevalent modern view that the various aspects of the law are and must be based on individual policy decisions and that the task of the judge or commentator is to shape the law in terms of the relevant policies as she sees them. The book, then, is an attempt to re-establish the law of negligence as a body of law rather than as a branch of politics. The book argues that the law of negligence is best understood in terms of a relatively small set of principles enunciated in a small number of leading cases. It further argues that these principles are themselves best seen in terms of an aspect of morality called corrective justice which, when applied to the most important aspects of the law of negligence reveals that the law - even as it now exists - possesses a far greater degree of conceptual unity than is commonly thought. Using this method the author is able to examine familiar aspects of the law of negligence such as the standard of care, the duty of care, remoteness, misfeasance, economic loss, negligent misrepresentation, the liability of public bodies, wrongful conception, nervous shock, the defences of contributory negligence, voluntary assumption of risk, and illegality, causation, and issues concerning proof, to show that when the principles are applied and the idea of corrective justice is properly understood then the law appears both systematic and conceptually satisfactory. The upshot is a rediscovery of the law of negligence.