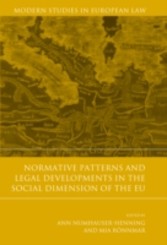 This book explores the normative and legal evolution of the Social Dimension - labour law, social security law and family law - in both the EU and its Member States, during the last decade. It does this from a wide range of theoretical and legal-substantive perspectives. The past decade has witnessed the entering into force of the Lisbon Treaty and its emphasis on fundamental rights, a new coordination regulation within the field of social security (Regulation 883/2004/EC), and the case law of the Court of Justice of the European Union in the so-called Laval Quartet. Furthermore structural changes affecting demographics and family have also challenged solidarity in new ways. The book is organised by reference to distinct 'normative patterns' and their development in the fields of law covered, such as the protection of established groups, the position of market functional values and the scope for just distribution. The book represents an innovative and important interdisciplinary approach to analysing EU law and Social Europe, and contributes a complex, yet thought-provoking, picture for the future. The contributors represent an interesting mix of well-known and distinguished as well as upcoming and promising researchers throughout Europe and beyond.