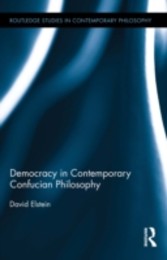 This book examines democracy in recent Chinese-language philosophical work. It focuses on Confucian-inspired political thought in the Chinese intellectual world from after the communist revolution in China until today. The volume analyzes six significant contemporary Confucian philosophers in China and Taiwan, describing their political thought and how they connect their thought to Confucian tradition, and critiques their political proposals and views. It illustrates how Confucianism has transformed in modern times, the divergent understandings of Confucianism today, and how contemporary Chinese philosophers understand democracy, as well as their criticisms of Western political thought.