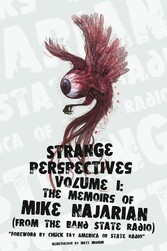 Strange Perspectives is known for its witty and humorous short stories and observations. These memoirs cover many aspects of Mike Najarian's life including his adventures as the drummer of the politically conscious, socially aware, and internationally touring band State Radio. Volume 1 covers his dealings with Slash of Guns N' Roses, Jerry Cantrell of Alice in Chains, Tom Morello of Rage Against the Machine, Mike Mills of R.E.M., Dave Matthews of the Dave Matthews Band, Perry Farrell of Jane's Addiction, Cam Neely of the Boston Bruins, and Wyc Grousbeck (the owner of the Boston Celtics) just to name a few. Although Strange Perspectives is light, fun, and easy to read it also digs deep into the human condition and displays a diversity of ideas and topics that make it a complete and well-rounded piece of writing. To stay up to date on the Strange Perspectives series and all of Mike's dealings please go to his Facebook page at www.facebook.com/mikenajarian.