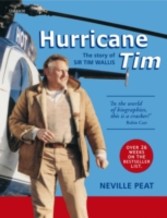 The gripping biography of one of New Zealand's most distinguished farmers, entreprenuers and aviation heroes. When Sir Tim Wallis's Spitfire crashed at Wanaka airfield in 1996, his accident was reported around the world. This lion-hearted Central Otago man, a legendary figure in the aviation, deer farming and business worlds, was suddenly fighting for his life. Sir Tim Wallis is known as the helicopter pilot and entrepreneur who pioneered New Zealand's deer industry. A multi-millionaire, he is also the man behind the successful Warbirds Over Wanaka air pageant. For decades he's had a passion for collecting, restoring and flying vintage fighter planes. Tim's adventurous life story is told here by writer Neville Peat, who shares his great love of the South: Fiordland, South Westland, Central Otago and the Southern Alps. Hurricane Tim is an absorbing account of the adventures of Tim Wallis that equally extends to faraway places where he applied his business instincts - southern Siberia, tropical Vanuatu and Canada. After Sir Tim's 1996 crash, he was given just a slim chance of survival. But survive he did. With astounding determination he has learned to speak and walk again, albeit slowly. Undoubtedly Tim inspires all who meet him, his story is equally inspiring. What drove this extraordinary character to live at the edge throughout his life? Author Neville Peat draws us into the hurricane that is Sir Tim Wallis.