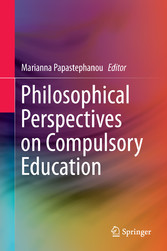 ?From antiquity to the present, schools of some form have, in one way or other, been involved in the material and symbolic reproduction of societies. Such diachronic resilience, along with the synchronic omnipresence of schooling often makes schools appear as natural, self-evident and unavoidable. This naturalization of schooling is then extended to its modern specification as compulsory in a universalist fashion. This book does not only seek to explore what is left of older debates on compulsory education in the years' hindsight but also to associate the discussion of schooling with new theoretical developments and new emphases. It contains a first part, which operates, primarily, at the conceptual and justificatory level and reserves a, more or less, qualified welcome to a revisited notion of compulsory. And it supplements this first part with a second, more applied one that focuses on specific aspects of compulsory schooling and/or education.  From Luther down to John Stuart Mill and John Dewey, compulsory education has been heralded either as a vehicle of social coordination and individual well-being, or as a vehicle of democratization and progress, or as a means for protecting the rights of the young and of society, and so on and so forth. But there have also been periods of challenge and denaturalization of compulsory education, producing a range of interesting and spirited debates not only on matters of educational legality but also on matters that boil down to broader philosophical questions about the self and the world. Without neglecting the lasting significance of older debates, argumentation over schooling, its character and its scope can be recast in the light of current philosophical educational debates. Given the fact that failure adequately to mine such connections leads to a lack in philosophical-educational engagement with one of the most central pedagogical practices of the contemporary world, namely, the school, the book aspires to remedy this lack and to put together work that addresses those connections through the highly original and innovative work of its contributors. The subtext in all contributions is a vision of educational transformation in one way or other. All chapters (from the most theoretical to the most practice-related) promote a version of a recast or redirected compulsory schooling.

Marianna Papastephanou has studied and taught at the University of Cardiff, UK. She has also studied and researched in Berlin, Germany. She is currently teaching Philosophy of Education in the Department of Education at the University of Cyprus. Her research interests include political philosophy, the 'modern vs postmodern' divide, utopia, the Frankfurt School and epistemological, linguistic and ethical issues in education. She has written articles on the above topics, she is the editor of K-O Apel: From a Transcendental-Semiotic Point of View (Manchester: MUP, 1997), and the author of: Educated Fear and Educated Hope (Rotterdam, Sense Publishers, 2009); and Eccentric Cosmopolitanism and a Globalized World (Boulder, Paradigm, 2012).