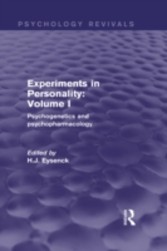 Originally published in 1960, the two volumes of Experiments in Personality report a number of experiments in psychogenetics, psychopharmacology, psychodiagnostics, psychometrics and psychodynamics, all of which formed part of the programme of research which had been developing from the late 1940s at the Maudsley Hospital. Presenting the studies together in a book, rather than the more usual route of journal articles, was itself felt to be an experiment at the time, especially given the wide area covered. The decision was deliberate because all the studies reported formed part of a larger whole, which would have been lost if published separately.Volume I looks at psychogenetics and psychopharmacology.